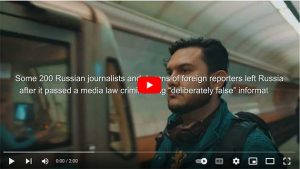 This year’s index focused on 180 countries across the world.

It found that journalism is totally blocked or seriously impeded in 73 countries.

Press freedom is constrained in 59 others.

This represents 73% of the countries evaluated.

The World Press Freedom Index has declined by 12% since first issued in 2013.

RSF has reported “a dramatic deterioration in people’s access to information and an increase in obstacles to news coverage”.

59% of respondents in 28 countries believe journalists deliberately try to mislead the public by reporting information they know to be false.

Autocrats, Criminal Cartels and Extremists have now harnessed this sense of fear for their own gains.

Some 200 Russian journalists and dozens of foreign reporters left Russia after it passed a media law criminalising “deliberately false” information.

According to Amnesty International, the “Russian authorities’ crackdown on independent media is escalating at breakneck speed”.

Free media in Hong Kong has been almost completely dismantled, according to Hong Kong Watch, a UK-based advocacy group.

Russia and China are deploying “lawfare” against independent journalists and big companies in developed countries.

The absence of the state, however, is now killing journalists in Mexico, among others.

According to their findings, no one has been held to account in 81% of journalist murders worldwide over the past 10 years.