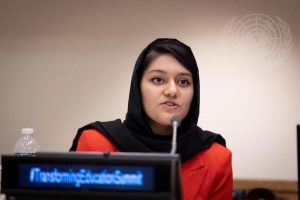 Aisha Khurram, a youth advocate from Afghanistan, told the Transforming Education Summit that despite suicide bombings and terrorist attacks, she continued her education. She reminded delegates that education was important as food, water, and shelter to young people.

By Naureen Hossain
United Nations, Sep 18 2022 – Suicide bombings shattered Aisha Khurram’s school, and her university was attacked by terrorists – but despite learning in an environment where the walls were colored by blood spatter, it never shook her determination to be educated.

Khurram, a youth advocate from Afghanistan, shared her experiences at the Transforming Education Summit (TES) session on “Education and learning in periods of emergencies and protracted crises.”

The session was hosted by UNICEF, UNESCO, UNHCR, Education Cannot Wait (ECW), Global Partnership for Education, and member states South Sudan and Ecuador. It took place at the UN Headquarters in New York on the second day of the summit, dubbed “Solutions Day”.

“Don’t be surprised when I tell you that I survived by chance during all those years,” Khurram said. “My school was shattered by suicide bombing attacks multiple times, and my university was attacked by terrorists, who shot at students right in the midst of lectures. And I remember sitting in a place where windows had been shattered, and whose walls had been colored with students’ blood splashed on them.”

No matter the circumstances, she was determined to continue her education.

“But those bullets, bombs, and attacks, they never stopped us from pursuing our education. Because we knew what the consequence would be. We knew what was at stake. We have seen firsthand. How the absence of education fosters insecurity and instability in Afghanistan.”

The second day of the summit was dedicated to launching or scaling up initiatives by the UN and its partners that are in line with the five Summit Thematic Action tracks, goals that spotlight areas that require greater attention, such as designing more safe and inclusive schools and the financing of education.

In the context of education in times of crisis, the purpose of the session was to solidify commitments from member states to implement high-impact, evidence-based solutions and to mobilize partners to support member states-led actions within clearly set time frames.

Early on, the session mooted the Commitment to Action: Education in Crisis, a proposal for the measures needed to transform education across all stages of planning and implementation during times of emergencies. This would ensure education for the most marginalized and vulnerable children and youth affected by emergencies.

With its many speakers and diverse experiences what was plainly made clear was that education had to be treated and delivered with the same level of necessity and urgency as securing food, clean water, and health in times of crisis.

“The purpose of this session will be to see how will we generate the commitments needed from partners, and to mobilize action,” he said.

The speakers present represented the member states and their partners among UN agencies, civil society organizations, and advocates.

Khurram also spoke on the current state of education in Afghanistan in the wake of the Taliban insurrection in August 2021, reminding those present that over 60% of the 4.2 million children out of school were girls. Girls have been barred from returning to school at the secondary level, a move that has drawn the global condemnation of the Taliban.

“An education crisis is a humanitarian crisis,” Khurram said. “Education is as important as food, water, and shelter to young people.” 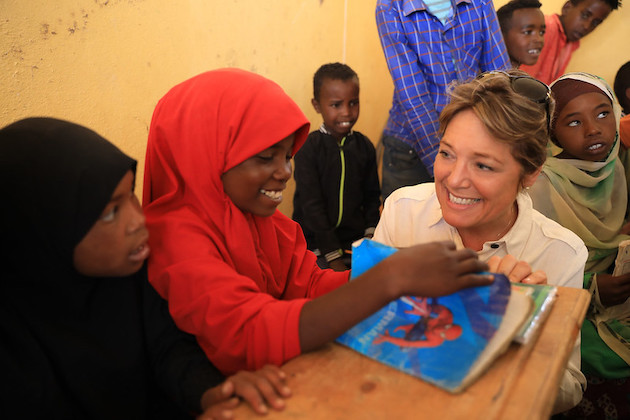 ECW Executive Director Yasmine Sherif told the session it was urgent that crises, like those in Afghanistan, were resolved.

“Because of the multilateralists that we have in the United Nations… we can access, we can talk to the de-facto authorities in Afghanistan. We can speak to the different warring parties, we can follow the different populations; the children and the youth are our number one,” she said. “We are able to reach those furthest left behind.”

“The UN has a three-decade-long coordination system that brings together civil society, co-led by the ministry of education, and the United Nations. So we bring everyone to work together, rather than compete, in one joint program.”

ECW research has shown that forced displacement caused by emergencies brought on by environmental or climate-induced disasters, armed conflict, and the COVID-19 pandemic has disrupted the education of over 222 million children. This includes 78.2 million out-of-school and at least 120 million students who are in school but are behind in their reading and mathematics proficiency.

The education sector was seriously underfunded. It only received 21% of the funds requested in 2021. In that same year, 2.5% of global humanitarian financing was allocated to education, which was below the target of 4%.

This speaks to the urgency in financing education to reach out to the most vulnerable and marginalized children and youth at this time, now more than ever. It is what makes multi-stakeholder participation and cooperation crucial to transforming education.

“Education has been underfunded in times of humanitarian crises… We need to deliver education as development in the humanitarian context. That requires ability, it requires speed, and it requires financing,” Sherif said adding that an estimated 1.5 billion USD would be needed to reach up to 20 million children by funding agencies and programs working in vulnerable areas.

Member States representatives also spoke on the necessity to protect education in times of crisis.

“Education is more than about the right to learn,” said Buthaina bint Ali Al-Nuaimi, Qatar’s Minister of Education and Higher Education. “It provides stability… We must place protection of children and youth rights.”

This session will prepare member states and partners to commit to the Commitment to Action, which will pave the way for the Spotlight Session on Crisis Situations on the Leaders’ Day of the summit on September 19.